And no matter how much we try, sometimes life just piles up.

And if you’re anything like me, that can sometimes lead to one seriously dreaded thing – Panic.

But that’s how anxiety + panic attacks work sometimes.  You can be going about your life just fine and then all of a sudden – what seems outta nowhere – it hits you like a freight train.

Like you just wanna run as fast and as far away as you possible can.

THAT part of it lasted probably about an hour.  The actual attack.  The actual panic that sends your mind + body off into what seems like another dimension and you are absolutely positively sure you’re gonna die.

Ever since River was about 7 months old, he’s been very tuned into my anxiety.  I never taught him anything…..every single behavior he gives me is all his doing.  And it doesn’t matter if we’re at home or out in a public spot – he gives me all he’s got.

River jumped up on the couch with me and I think he must have sat there staring at me like that for a good 5 minutes.  I was trying so hard not to give in to that feeling of needing to escape……and doing my damn best to change my mindset.  My thought process.  I don’t think I have to tell you that  if you’ve ever had any level of panic attack  – sitting still is the hardest thing to do.

River must’ve decided within himself that we had a problem that he needed to get to work on…. 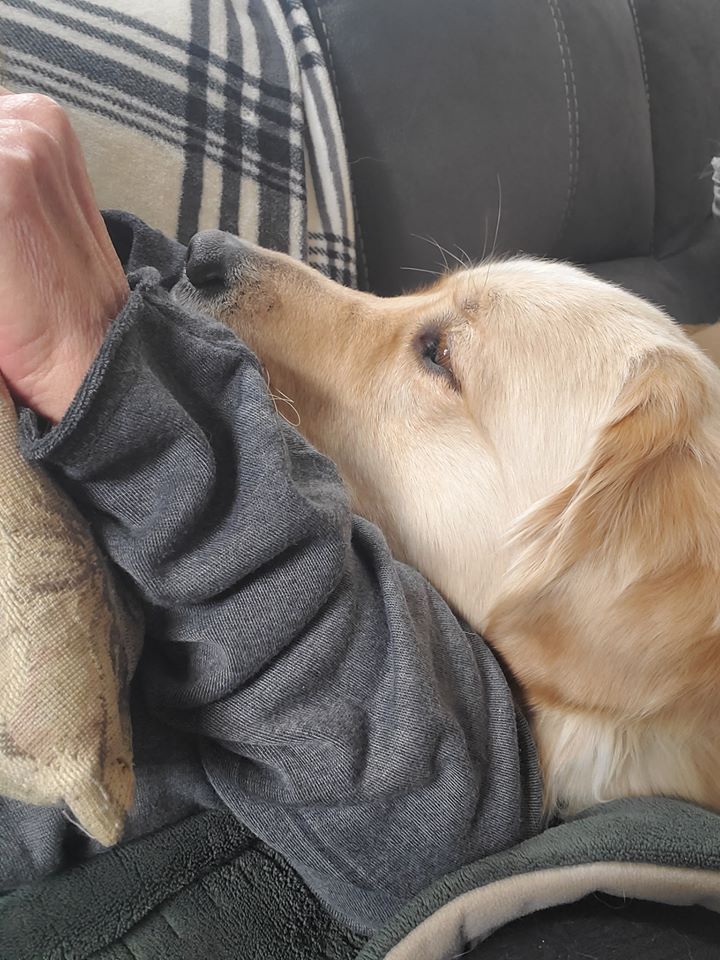 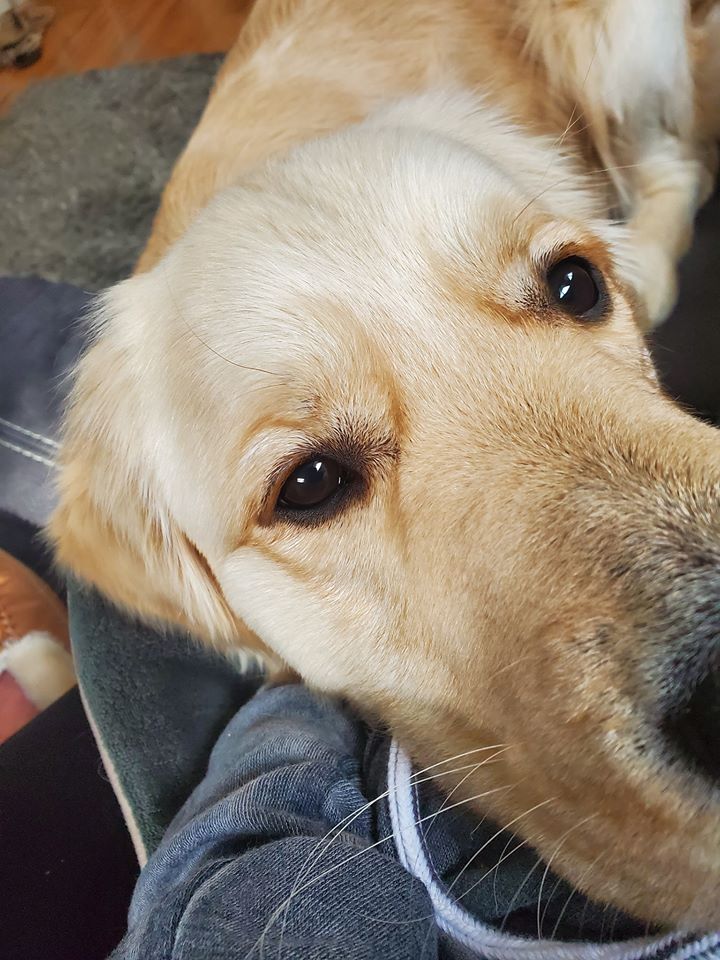 …….because this is what he does.  He covers me.

The reality is that he’s not really covering me but HE thinks he is.  He is just laying the top half of his body across mine…..which is pretty damn brilliant if you ask me because all the literature you read about how to help someone having a meltdown is to hold them.  Body hug them.

Translate all that into what he’s really doing – preventing me from giving into that urge running through every inch of my body + mind to get the hell away.  Run.  Escape.

The truth is that it really doesn’t hit you out of nowhere.

And if there is anyone in the world that is always preaching about mindset???  IT’S ME.

But here’s the deal.

Since way back in January, I haven’t been practicing what I preach.  I mean, in most areas I have been but definitely not in this one super important area that I KNOW I struggle with.  Maybe I had been sorta paying attention to my thoughts here and there, but I wasn’t giving it the attention that I usually give it – which is a lot – and “a lot” is what keeps me outta panic attack trouble.

Then, over the last several days when these other random things popped up I totally dropped the ball.  100%.  Not focusing on or even aware of the thoughts that were going through my mind and not even paying attention to the physical manifestations that these subconscious thoughts were bringing on.

And in case you didn’t realize – that happens.  Our bodies react physically to the things that we’re thinking – consciously or subconsciously.  And any physical symptoms brought on by those negative thoughts are only going to quadruple in severity.

After the hour of actual panic started to subside and I was thinking more clearly and actually able to focus on my thoughts (because I don’t care who you are – thinking clearly and level headed and making sense of a panic attack and what it really is WHILE it’s happening???  Just not happening) I went and sat on the steps at my back door.  No other reason than needing to be able to see outside + feeling some chilly air through the screen door that hopefully would help ease my nausea. 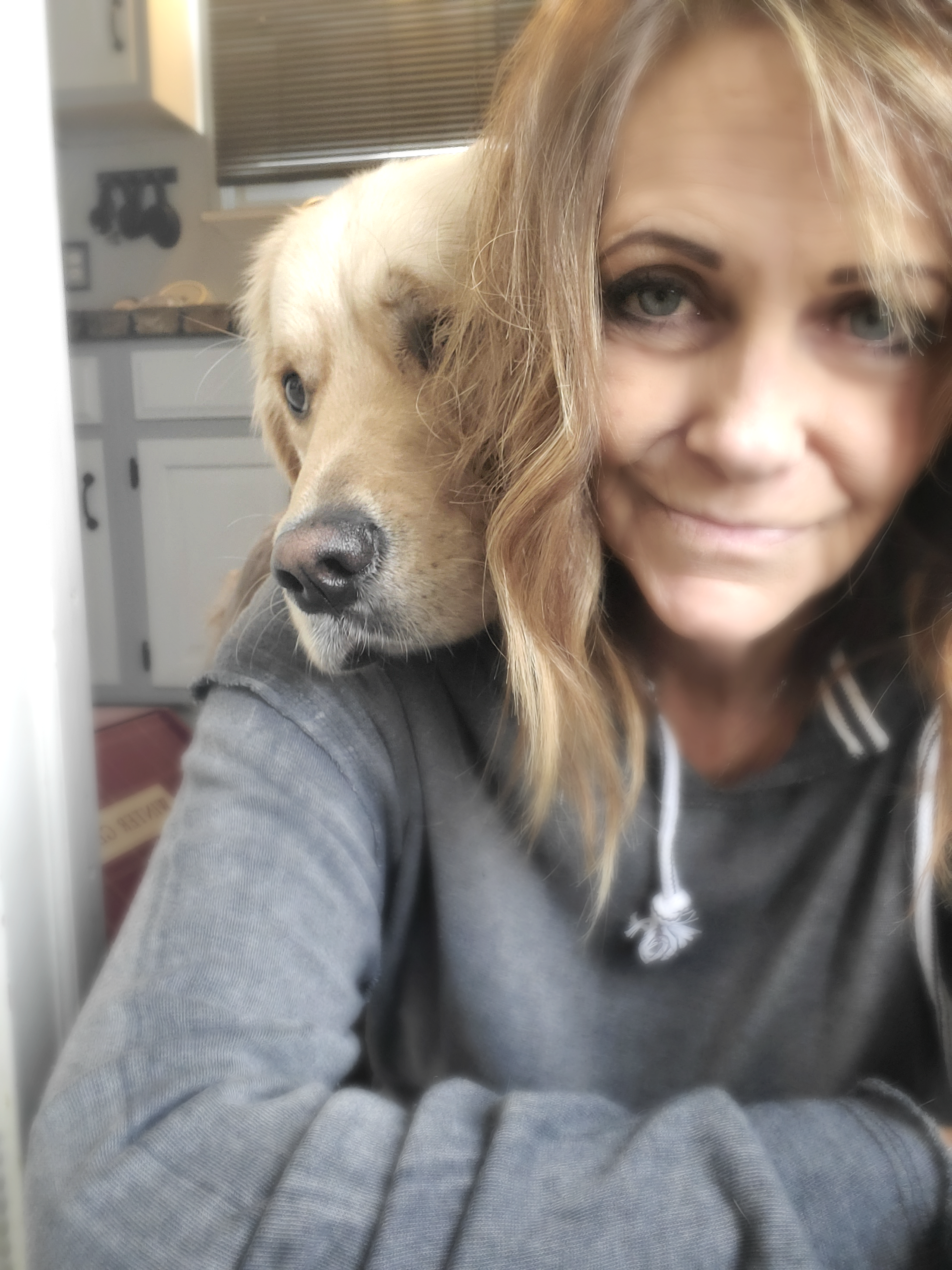 River was still “tasking” at that point.  He must’ve been able to tell that although the hour long freight train of panic was over, I was still feeling anxious and let’s face it – completely worn out.  Mentally and physically.  100% spent and I stayed that way pretty much the rest of the evening.  Girl, it takes a lot out of ya when your mind and your body are in overdrive!

Here’s the thing…..anxiety + panic attacks are an enormous part of the reason that I truly began practicing the whole mindset thing.  Nevermind that I truly believe that you can manifest anything you want from this life by your thoughts and your energy, and nevermind the fact that my dad was preaching “you bring about what you think about” to me since long before positive mindset became a hot topic…….

I have managed to keep myself from this full blown panic state for a very long time by simply staying tuned in to ME.  And that alone is worth all the giggles or weird looks I get when I start talking positive mindset.  I think people are waiting for me to break out my hippie beads, bell bottoms (although I still love those!), tie-dyed tee shirt and walk off into a big field of wildflowers while singing California Dreamin’.  😉

Yep….I failed.  Because I’m human.  And it was a BIG fail.  A fail that took a lot out of me.  But I refuse to ONLY see it as a fail because the truth is, it reminded me (with a big ol slap to my entire body with all my panic attack symptoms) exactly WHY I believe in and practice positive mindset, positive self-talk and most importantly – self love.

And if YOU wanna know how to begin that process, just ask me.  I love sharing!

Today has been a MUCH better day!  The worried look is gone from River’s face, the pure exhaustion of daily anxiety leading up to a complete meltdown is gone from my face and I was lucky enough to spend a cold Saturday INside sitting at my desk getting some work done! 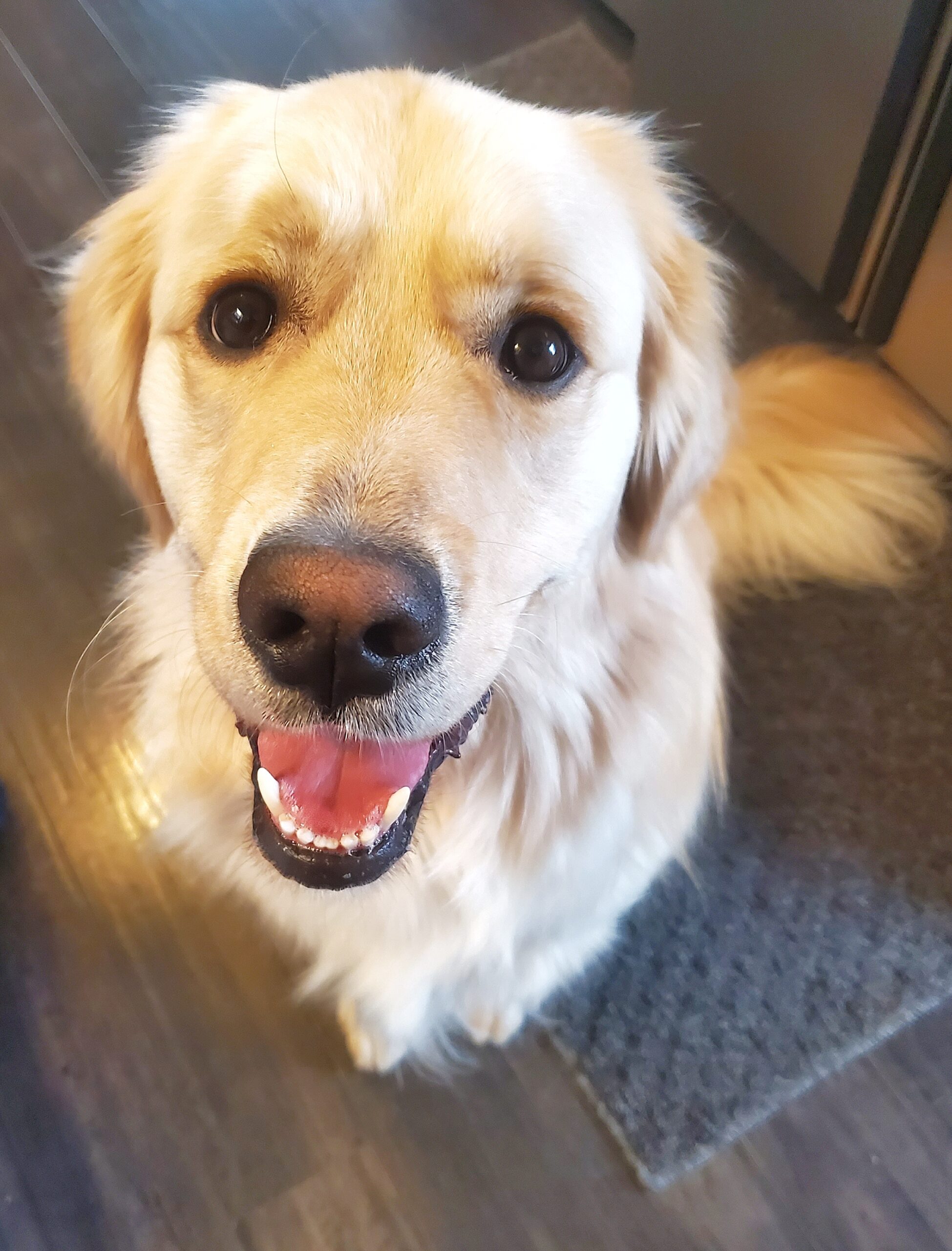 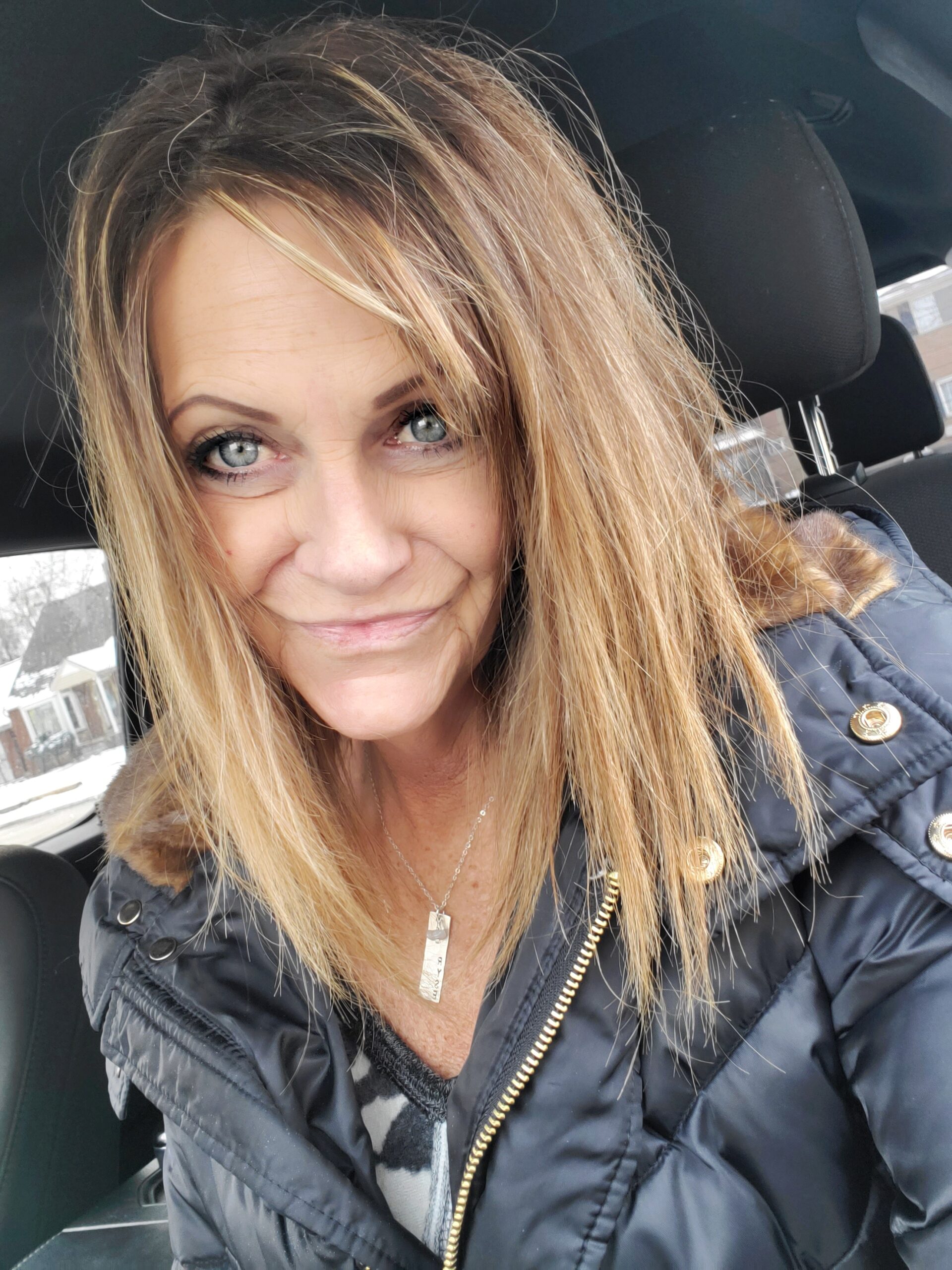 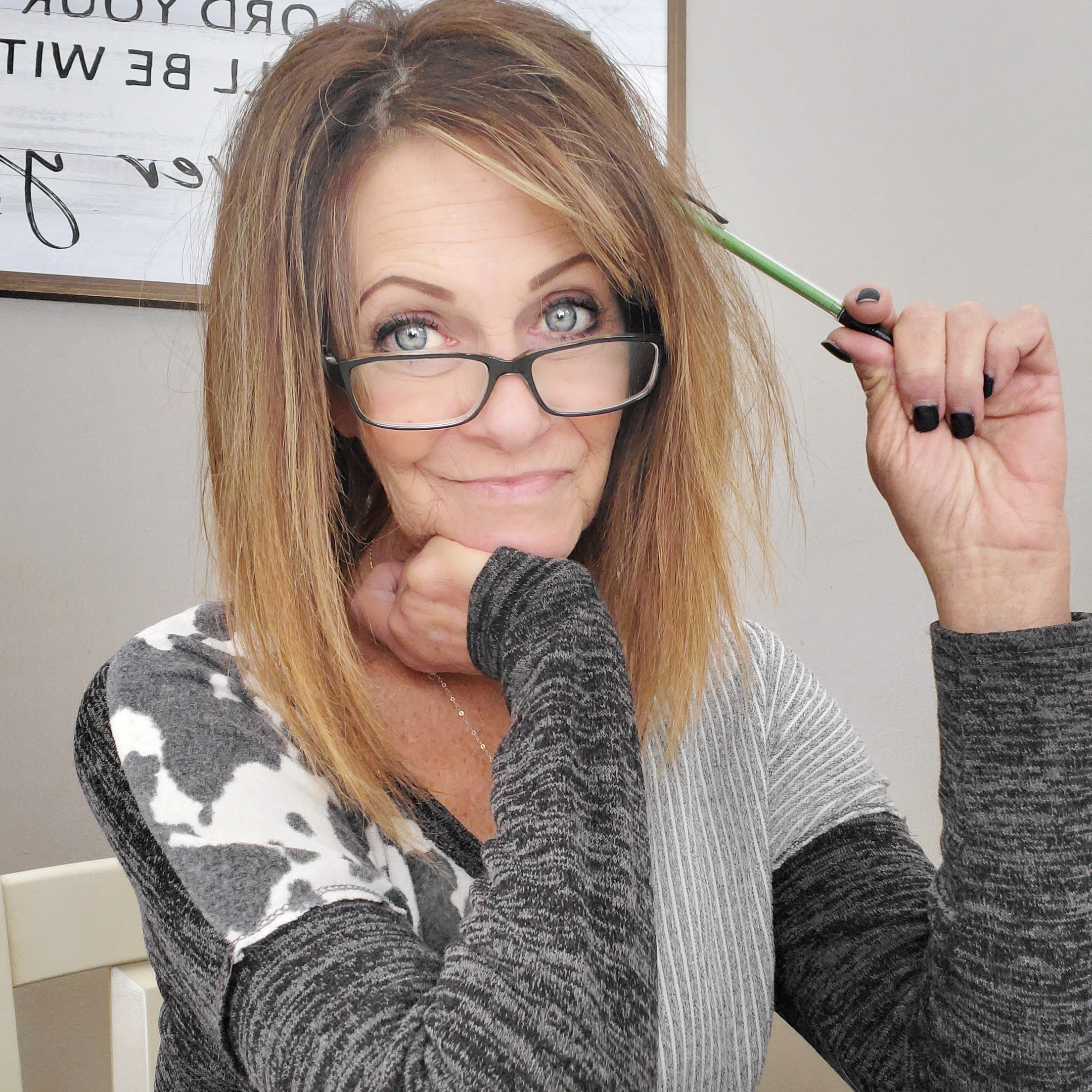 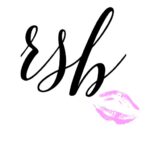 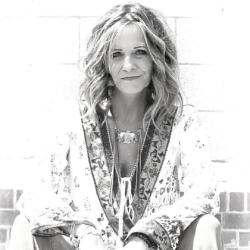 Send Me A Message!